Rip it, roll it, and punch it!

You know that scene in Finding Nemo where Squirt is talking to Marlin.... 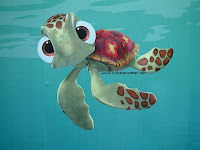 It's like he's trying to speak to me, I know it. Look, you're really cute, but I can't understand what you're saying. Say the first thing again...


That is pretty much how I felt Saturday morning grappling Ben.


He swept in pretty much the same fashion about 10 times...after the first few, I started thinking... Okay, he clearly wants me to do something other then what I am doing....  but in the five minutes I couldn't figure out what he was trying to show me...  I kept trying to get my base off of him, and on to the mat, but I couldn't figure out how to do it...  So, I basically kept trying, and failing to kick my leg backward to get out of his hook and post my leg out.  (What is the definition of stupid?  Repeating the same thing expecting different results....lol)


After the grapple, he told me to wait right there for a second because he wanted to tell me something.... so I knew my suspicions were correct.  Ben was trying to tell me something I just wasn't getting.  And it of course was pretty much one of those, "Oh, duh, I am an idiot." moments.


He wanted me to go the way he was pushing me... Step my foot over his head and get to side control.


It was an extra duh moment because it was a simple motion.  Step.  Take a step.  And doubly stupid because Ben has probably told us 1000 times to go with what you are being given.  Don't force anything.


So, I am going to actively start trying to just go where I am being pushed...  Going with the flow.  You push, I pull... Or you push, I step over your head and get side control.  lol

Posted by Jiujitsunista at 7:19 PM

Email ThisBlogThis!Share to TwitterShare to FacebookShare to Pinterest
Labels: duh