I hope you all have a safe, and blessed holiday! 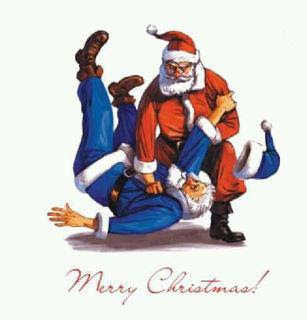 Posted by Jiujitsunista at 10:06 PM No comments:

Email ThisBlogThis!Share to TwitterShare to FacebookShare to Pinterest
Labels: life

Yesterday Team Fabio Novaes rocked the NAGA Pan-Am.  (Really, Naga? The Pan-Ams?)
I made a great contribution to the team by spectating my butt off.  I spectated SO much that I can be spotted spectating in pictures all over Facebook.
Most of my spectating happened in the Women's corner of the mat. 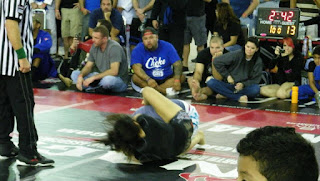 And my most amazing feat of the day.. Here I spectating while actually standing.  Amazing. 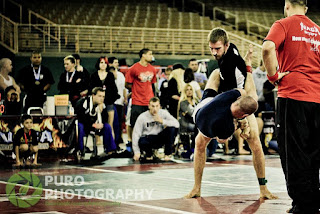 This grapple by the way, was awesome.  The human fanny pack of doom pictured, is Marcelo Cohen.  He trained with Fabio under Marcelo Saporito and now teaches at The Armory in Jupiter, Florida.
Seriously though, I wish I could have made an actual contribution to the team and actually compete, but alas, I could not.
Team Fabio Novaes didn't need much help though.  They kicked butt up and down the mat all day!  At the last NAGA our team took second in gi and no gi.  We lost first in gi by 80 points.  The team who won first place, by the way, had 86 members.  Our team had 23.  I think we brought home more medals this time.   And yes, I am shamelessly bragging on my team a little, and I think it is allowed.  I sort of love those guys.
I especially wanted to give a huge congratulations to Erica!  This was her first competition as a blue belt, and she took home silver and bronze!  Awesome job girl!  Love you!! 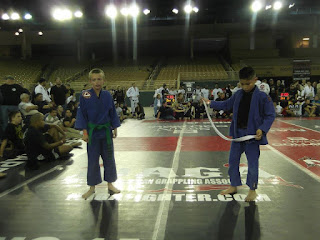 Didi He won second in nogi, and first in gi.  This kid keeps his cool like no one else.  Way to go Didi!! 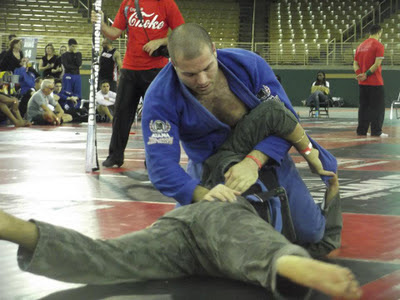 Beast mode Jimmy!  (Though, I think that is his only mode.  Some guys tried to mug him once, but he told them to stop... and they listened.  Seriously.) 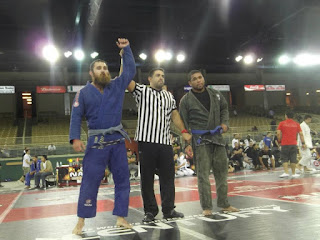 This is Derrick.  He is currently working his lumber jack look.  He pulls it off quite nicely, don't you think? 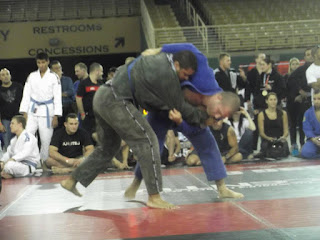 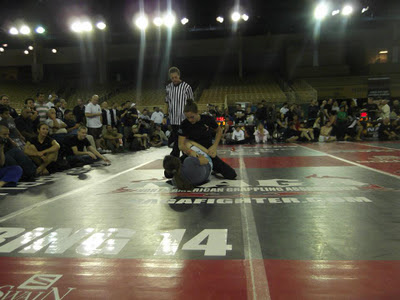 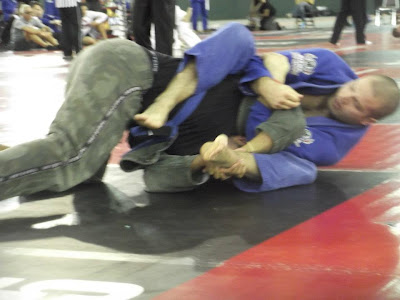 This guy, who was very nice, got his day ruined by being bracketed with Jimmy and Derrick.  Two if the biggest scariest most technical blue belts we have. 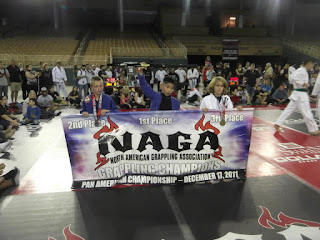 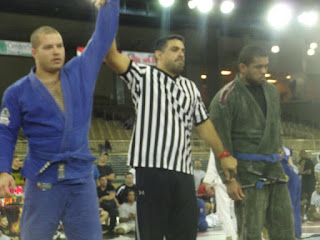 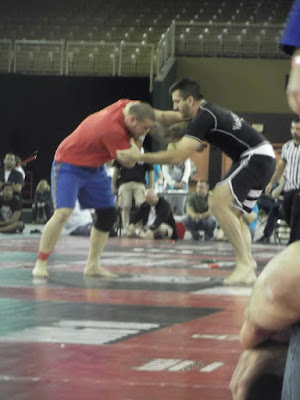 Tony - He is the one in black and white.  Like Jimmy and Derrick Tony is also, very large, scary and technical. 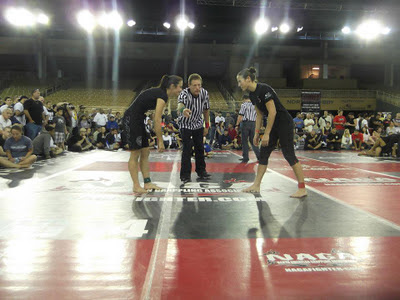 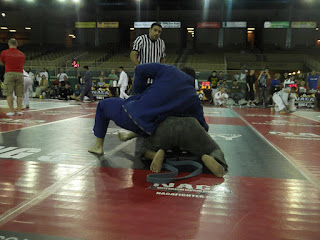 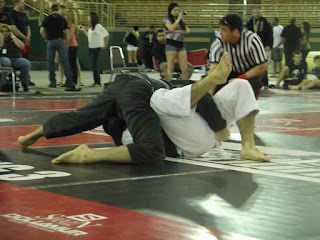 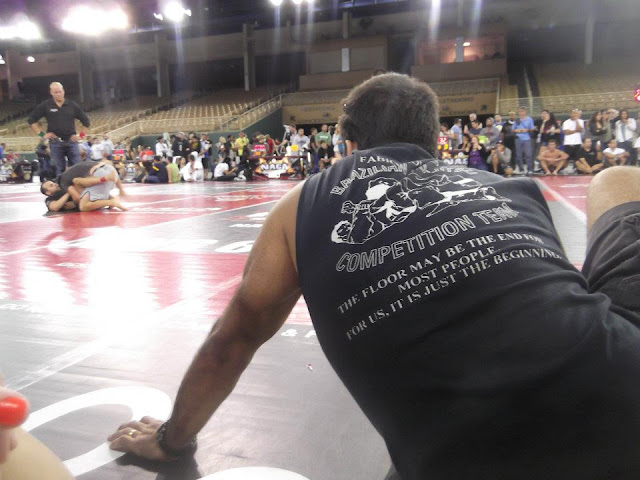 Thank you Fabio for all that you do for us!  We love you!!
Posted by Jiujitsunista at 10:25 AM No comments:

The best part of sitting out...

I have found a way to go to class while injured and not grapple.

Go to class in jeans.  Leave my gi at home.

I've gotten to take advantage of the one perk of being sidelined. 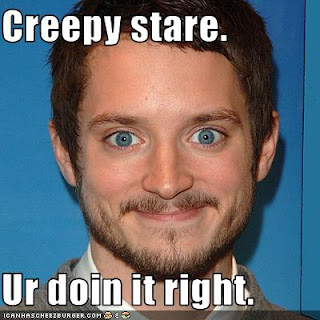 I get to sit on the wall and watch all of my favorite grapplers, grapple... and of course by watch, I mean stare at intently for several minutes... like a creep.

We have also had a horde of interesting new people come in.

I always love to watch new people on their first night, so when the new people coming in are bull riders, or a break dancers it can be even more entertaining. 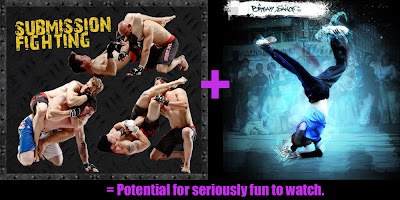 I think one of my favorite quotes someone has said to me about another grappler was a guy named Paddi.  Yes, a guy named Paddi.. with an i.  He'd just grappled the aforementioned bull rider.. and, I do mean this in the literal sense.  He is a man that rides bulls for a living in a rodeo show.  I live in Polk county.  It's not that weird here. 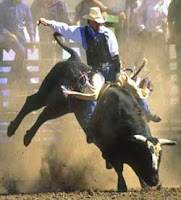 "When he grabs a hold of you, he isn't kidding."

It is also interesting when like last night, the newbie is a grown man the size of Texas with close to no body fat. 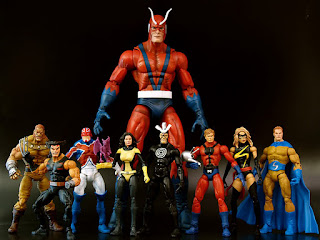 I was, for the first time ever, glad I did not have to grapple the new men who come in the door.  The guy was a dinosaur, and I was pretty sure he could have just held me down with one hand, and I'd have been rendered useless for the duration of the grapple.

I did however, very much enjoy watching some of the guys grapple him.  Generally, I am the smaller weaker person of a grapple, (unless it is another woman, as I am kind of giant for a chick.) so I get a lot out of watching our normally bigger guys be the smaller one.  I like watching how they handle the size/strength differential... because no matter how good you are, when you are grappling Texas... size does matter.

And of course I've been able to watch lot of the people I normally creep when I sit out.

Doug for example is a really awesome grappler who I consider to be a male version of me, at least in the body type department.  He is really tall and lean.  Or, "lengthy" as I have been called. 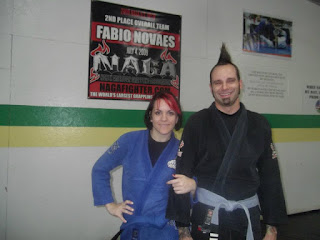 I wasn't kidding when I said he was tall.

I like to watch how he uses his wasp legs powers for good.  Doug also happens to be able to make you cry like the little girl I am when he turtles.  Sometimes, I forget that when he turtles I am about to lose.  Hard.  I enjoy watching other people forget that very same thing.  lol

One more week of my creeper status and I am going to attempt to drill.

And not surprisingly taking time off is helping a lot.  It is still a little painful to sit on my foot in my base, but I can at least do it now, where as before it was too painful to even try.   Progress!

Posted by Jiujitsunista at 1:57 PM 5 comments: