You too can grapple.

I have had a realization.

No one, and I mean no one, ever in the history of the world or in the endless future of this planet will anyone else be as awful at Brazilian Jiu-jitsu as I was on my first day.

I think it is a testament to my instructors, teammates, and even to my own determination and dedication that I have come this far.

I know I have a tendency to exaggerate, but for the sake of the point I am making, I am going to speak in facts...  And yes, I was really this bad when I started.

When I started I was an out of shape, over weight mom, nerdy mom.  Other than some running in high school, I had zero athletic background.  None.  And what is worse, I really believed that as a girl, being weak and nonathletic was not only okay, but the right way to be. 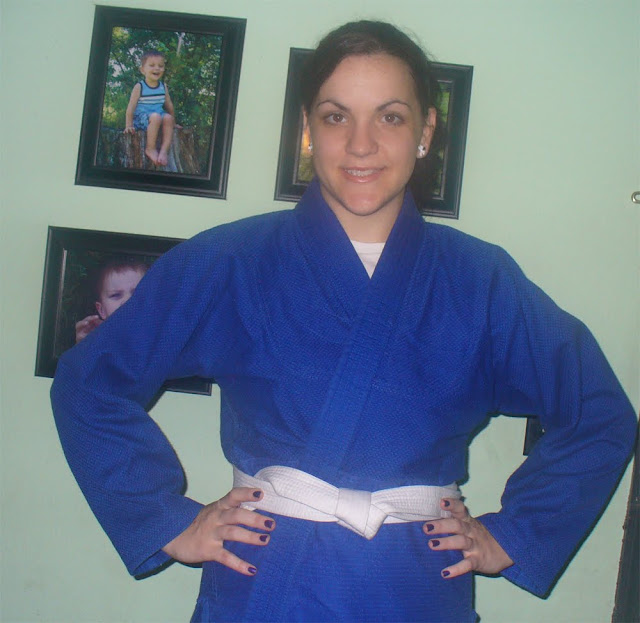 I very clearly remember my first day.  I was horrible at everything.  Everything.  It took me three months to get a forward roll right, and I mean from sitting, not standing.  I just couldn't do it.  My instructor at the time Mario, bless him and his infinite patience, had to help me.. and by help, I mean basically pull my legs over my head for me, for weeks until my body could figure out which muscles I was supposed to use to get my ass over my head while going forward.   Once I could do it myself, I went sideways for a looong time.  In his also infinite wisdom he didn't even bother asking me to try rolling backward until I had been going for several weeks.  I eventually did get it right though...forward and, believe it or not, backward.

I barely, and I mean BARELY made it through warm ups.  I had to stop and walk twice while we jogged what was maaaaybe a quarter mile in laps around the mat.  Mario jogged alongside me to encourage me, and I remember being absolutely FLOORED that he could not only do it, but he was talking to me totally unwinded - unphased at what I was truly struggling to do.

I couldn't hip out either.  I couldn't even wrap my head around what the heck he was asking my body to do. He showed me about seventeen times, and explained over and over that I was supposed to basically move my butt up to where my head was by way putting my foot near my butt and pushing my body up.  Nope.  Does not compute.  I ended up doing an extremely awkward, embarassing backward inchworm maneuver on my back across the mat and back.

Then it was time to grapple.

I remember thinking, "How am I supposed to do that?" I did bumble through three grapples that day, that were very much a blur.  People were putting their bodies on me, sweat happened, my head went in crotches, arm pits were near my face.  I was being touched.  A lot.  And at the time I was very much a person who required person space. 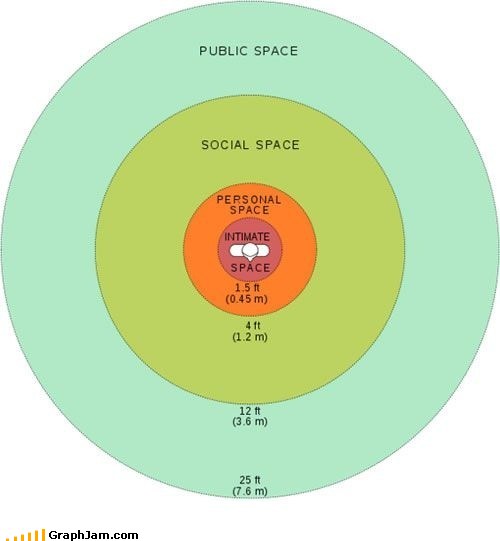 I did not want people even to be inside my orange circle, but everyone was all up in my red circle like they belonged there.  It was horrifying.

The morning after my first class, it hurt to get out from under my blanket.  Not because I was hurt, but because I was so out of shape, and my muscles were so accustomed to not being used that a single class of Brazilian Jiu-jitsu nearly crippled my upper body.  (Okay, maybe that was a slight exaggeration, but it did hurt to move my blanket.)

But against the odds I loved it.

Now that I help Allie with the women's class I see a lot of female beginners, and that is what made me realize just how terribly uncoordinated and out of shape I was when I started.  The first few times I saw people do forward rolls on their first try, I was kind of shocked, but now I see that being able to do that is something most normal people can do on their first try.  lol

It just makes me realize all the more, that.. Yes... everyone can do this.  No matter how much you think you don't have the ability, or that it isn't something you could do... You can.  Trust me, you can.  You just have to try, and keep on trying.

I don't think I am great, or even above average... at best I am an average blue belt, but the fact that I came from where I was to being an average grappler in a little less than two and a half years gives me a sense of pride.  With the help of some really great coaches and amazing teammates, I have come pretty far.

It makes me really happy. 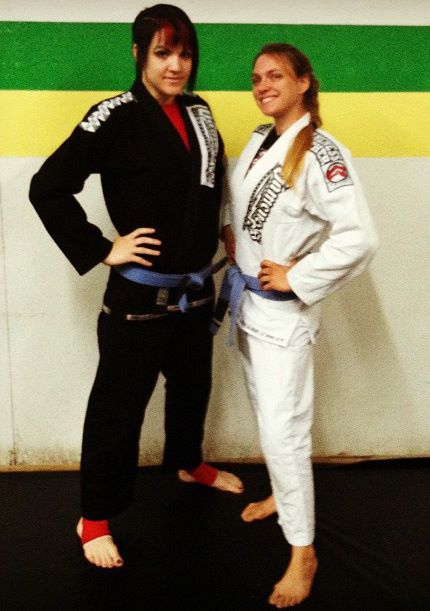 Posted by Jiujitsunista at 1:33 AM 8 comments: