Muzio De Angelis is a fourth degree black belt, he has been training since the age of five, and by received his black belt when he was 22.  He is also the Vice Director of Arbitration for the IBJJF and CBJJ, and the director of FJJFRio.
This Saturday he is giving a seminar on the new IBJJF rules, and going over some technique.
I am super excited.

Posted by Jiujitsunista at 11:25 PM No comments:

Email ThisBlogThis!Share to TwitterShare to FacebookShare to Pinterest
Labels: seminars

Tampa NAGA was great.  Aside from the very large amounts of waiting in a gym that was probably about 80 degrees and smelled like a sweaty mans back side.... I had a great time.


Allie and I instituted an old Fabio tradition.  On the way to your first competition, you are tied to a teammate for when we leave, until when we arrive at the venue.  Lucky for Madison and Rowan, we were only going to Tampa.  However, since only Madison competed, for Rown's first competition we can do it again!  ahhaha 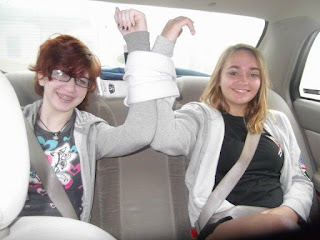 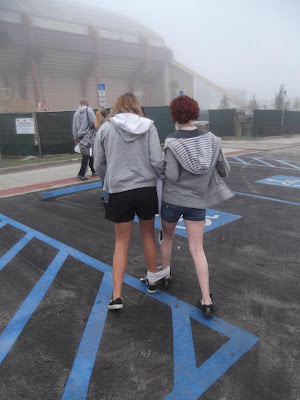 For two coordinated girls, they had a surprisingly difficult time with this. lol

Madison is a 5'8 twelve year old, so they had kind of a difficult time finding a fair match for her.  People her size are older, and people her age are generally six inches shorter thus a lot lighter.  So, for her first no gi match, she ended up going with an older, bigger more experienced grappler.  Madison was doing really, REALLY well until she got caught in an inverted arm bar.  Unfortunately, since Madison has only been training a month, she hadn't yet had an opportunity to learn how to escape.

Regardless of the outcome of her grapple though, I am beyond proud of her.  Most grapplers don't have the courage to do what she did yesterday, and she did it with a smile on her face, a great attitude and was a contributing member of the team.  So proud of her!

Rowan, one of our other girls came along to watch and she will be competing in April! Woohoo, Rowan!  I can't wait!

As far as my end of the competition goes.

Erica and almost exactly the same height and weight.  We were both promoted on the same day and have been grappling the same amount of time.  On paper she is my ideal training partner.

For whatever reason, Erica had been paired up with this same woman at I think 4 of her 5 competitions, and although Erica grappled fantastically every time, she has yet to beat her...  and I had yet to grapple her.  And she was there yesterday.

But unfortunately, she beat us both yesterday.  I am perfectly happy with it though.  Granted, I would like to have beat her, as would Erica, I am sure, but she is a good grappler and a good sport, and I felt like I grappled well in both my matches against her, so I am okay with my losses.

I fought her in both gi and no gi.  She was my first no gi match.  I don't know how many points she won by in no-gi.. I forgot to look.  Oops.  Though, I have the video, so I can watch it and figure it out.  Everyone said it was a good match though... but really what else are they going to say.  "Way to lose, that was terrible."

In gi she was my second match, she beat me by three points.  Most of the match I went between various forms of half guard, never being able to sweep her, she passed toward the end, and I was never able to escape her side control.

My first gi match I won 15-0.  The girl I grappled fought well, and she bent her finger cockeyed toward the end of our grapple, but finished the fight, and fought again after with a taped up hand.  I know it is stupid to risk further injuring yourself to continue grappling after an injury in a competition, but it always kind of inspires me.  It takes a lot of heart, and a love of the sport to do that.

Erica and I both lost and won the exact number of matches, but because of the way it was bracketed I would have taken silver for both.. and since the medals were going to the team either way, we flipped for silver and bronze.  Next time though, we flip for silver and gold!

And because the photo upload is being a spaz - Here are pictures from yesterday in no particular order. 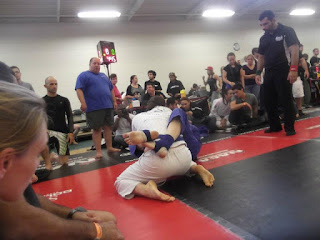 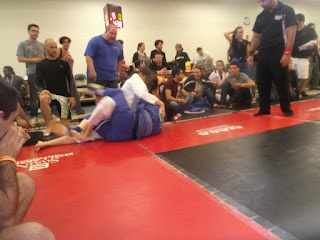 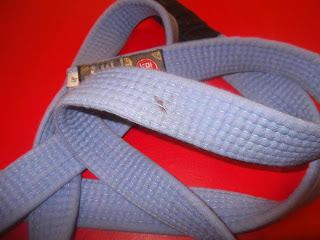 Someone bled on my belt 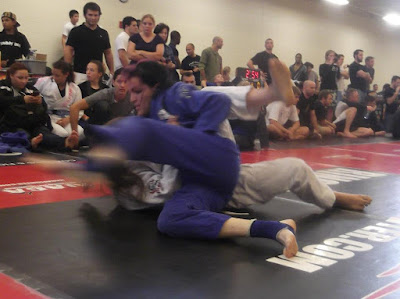 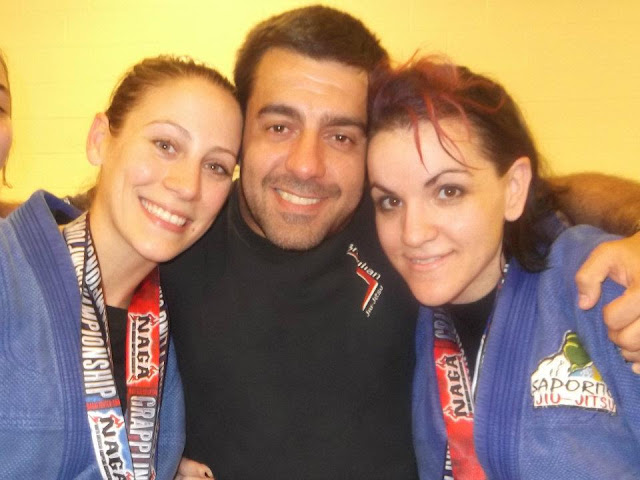 Erica and I with Fabio 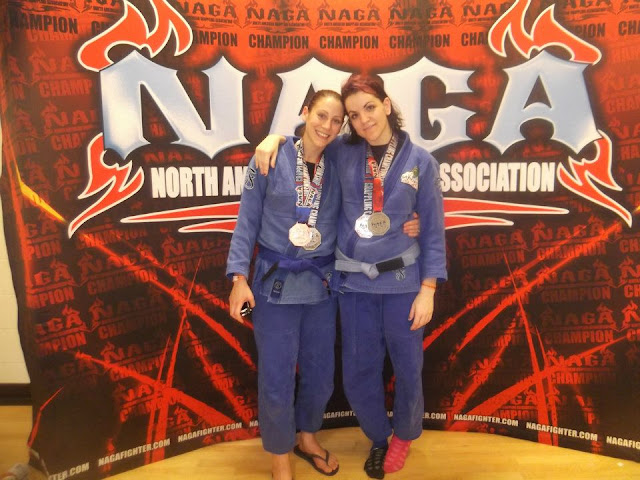 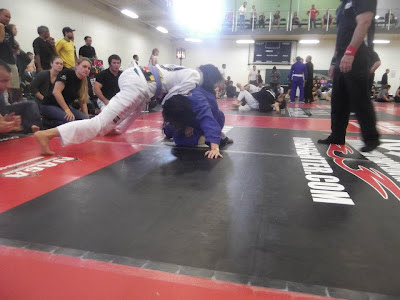 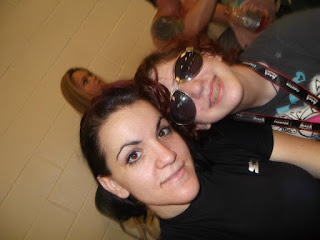 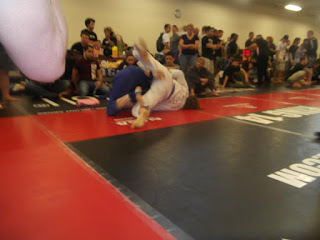 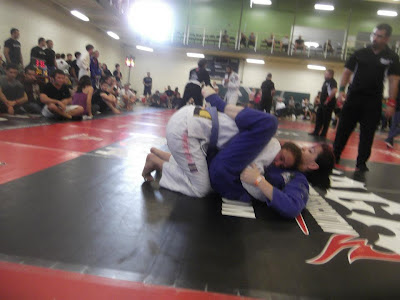 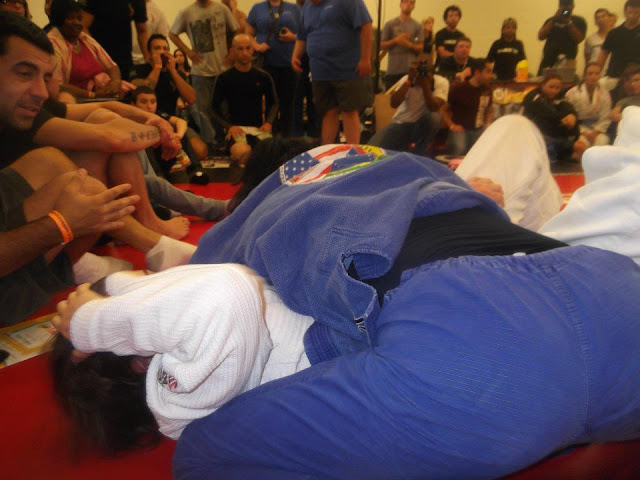 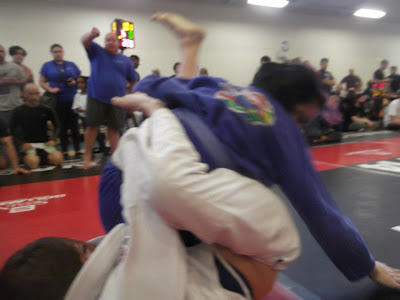 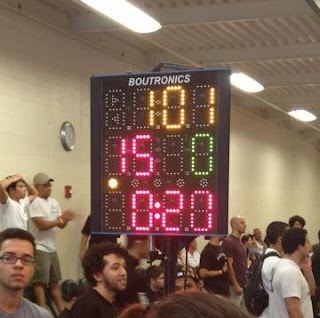 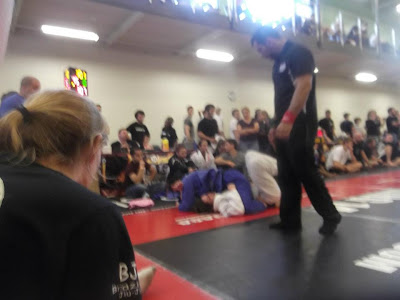 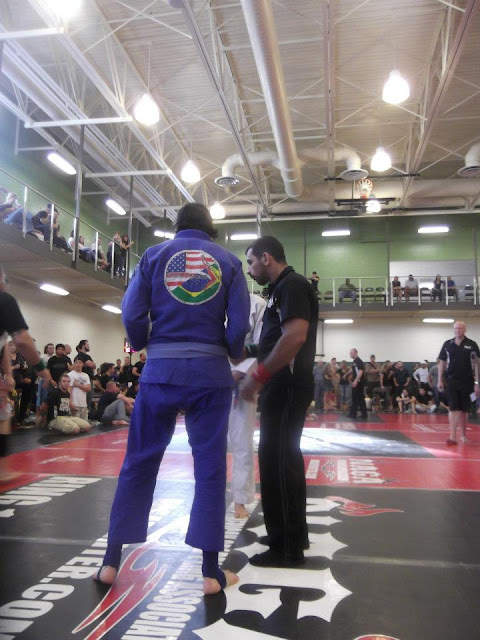 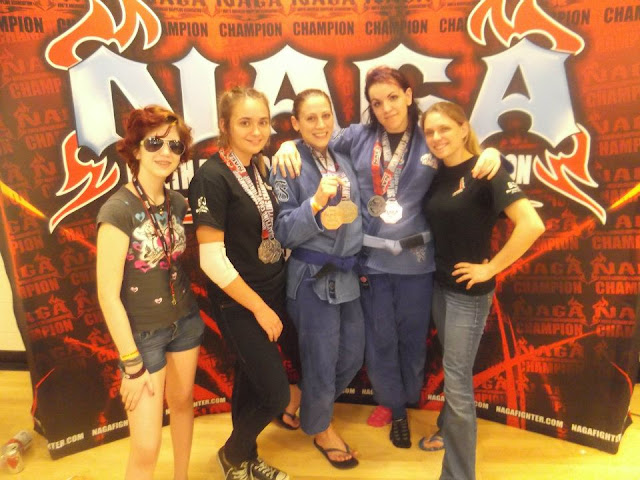 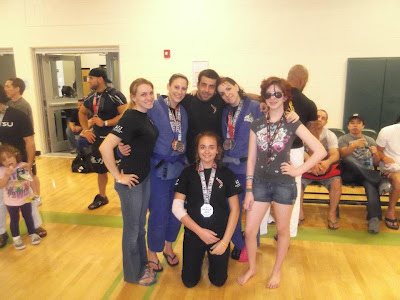 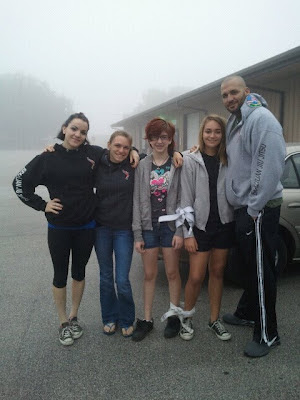 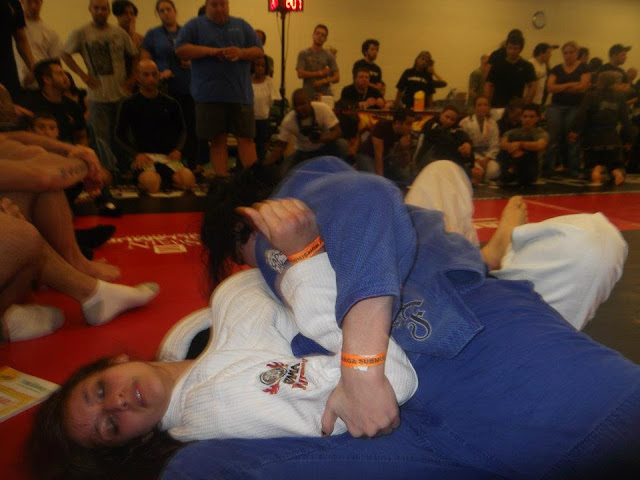 And these are vaious shots from my no gi match.  I need to suck less at bottom half guard. 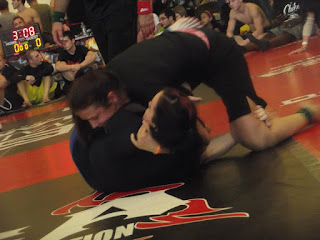 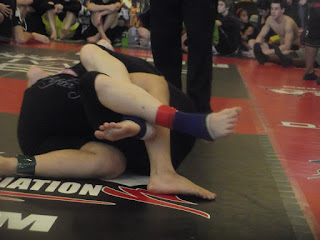 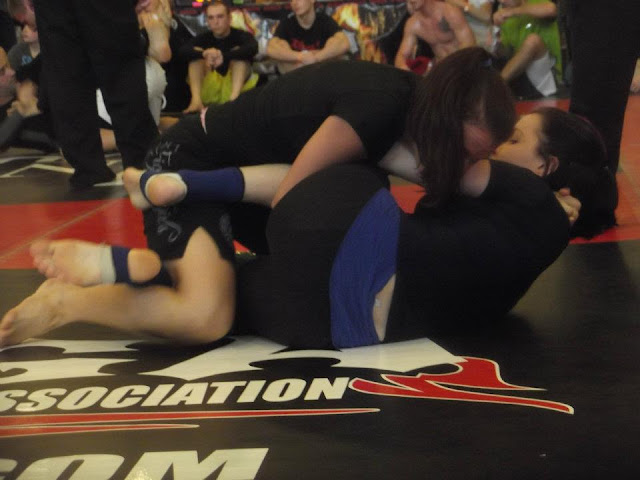 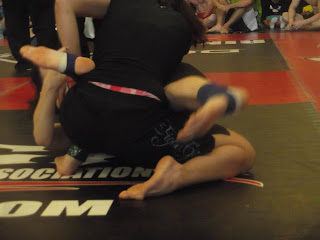 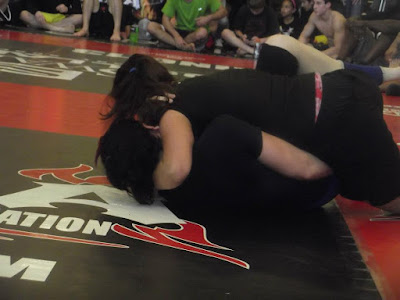 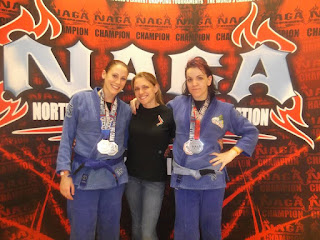 Posted by Jiujitsunista at 10:59 AM 8 comments:

Email ThisBlogThis!Share to TwitterShare to FacebookShare to Pinterest
Labels: competition

Pay no mind to the battles you've won
It'll take a lot more than rage and muscle
Open your heart and hands my son
Or you'll never make it over the river.

It'll take a lot more than words and guns
A whole lot more than riches and muscle
The hands of the many must join as one
And together we'll cross the river. 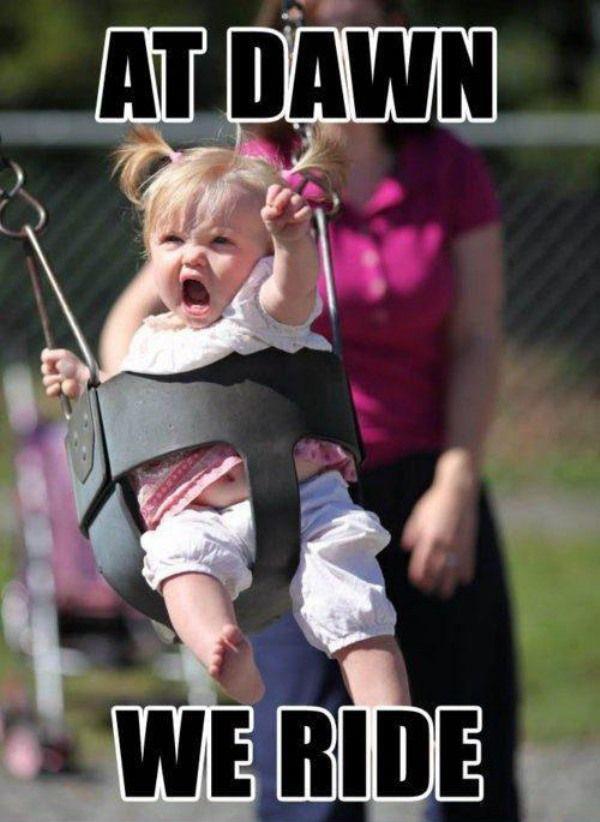 Posted by Jiujitsunista at 3:16 PM No comments:

I think I forgot to mention...

I am competing this weekend.

In other, more exciting news one of the ladies from the women's class is also competing!  It is her first competition, and being so excited for her, I've been more focused on getting her ready than myself..  Oops.  lol  I've done this enough times to know what I am getting into, and as much as I love the really hard push in training before a competition I'm sure I will be just fine without it.

Not thinking as much about my own preparation this time around has staved off pretty much any and all nerves I have about myself.  The only thing I've been going back and fourth on, is whether or not to compete.  I don't want my competing to get in the way of being there for Madison. I am sure it won't though.  She will be in the teen division and will be done well before I compete.

Super excited for her!!

Posted by Jiujitsunista at 11:30 AM 4 comments:

We miss you already.

We adopted our dog China.

She was an older dog when we got her, and she was abused and starved regularly.

I had a small baby, she was set her in ways, had a hard life and was part pit bull and I didn't think we could trust her.

We took her in because she so badly needed a good home, but she wasn't with out problems.  She was terrified of men, and had some food aggression because she had been starved on and off her entire life.. but she grew on me pretty quickly, and before I knew it, she became part of the family.

I think because of her hard life, she was so happy to finally be loved she returned our love 10 fold.  She was the happiest dog I've ever known, and acted like a puppy until her hips wouldn't let her jump any more.

When strangers came over, she always positioned herself between the kids and the people she didn't know.  I think she might even love my kids as much as I do.  She would have died to save them in a heart beat.

And until about a year ago when her arthritis started to set in China was my running partner.

She was the first dog I ever really loved.

Tuesday morning when I woke up, China was acting very strange.  Normally every morning China and Vader greet each other by barking and jumping all over each other like idiots.  But that morning China didn't stand up when Vader ran over to her.

When I finally got her on her feet she was very wobbly and weak.  I was hoping she was just having a bad day with her arthritis so I brought her inside, made a bed for her and let her relax, but the longer the day went on the more wobbly she got.  By Wednesday afternoon she could hardly stand or hold her head up, I had to hold it up for her so wouldn't drown when she tried to drink.  As it turns out, she had a stroke.

So, I talked to my good friend who is a vet.  She said she could come to my house and put her to sleep here so I didn't have to drag her out and she could go to sleep in peace at home.

Last night before the kids went to bed they said good bye to her.

I struggled with my decision to put her to sleep up until the very last second.  It wasn't until she was sedated that I realized just how much she had been suffering.  She laid down and looked peaceful for the first time since Tuesday morning, and finally stop struggling to hold her head up.

I burred her in the back yard under the shade of her favorite banana tree.  It looks dead right now, like it does every winter... but every spring it comes back, more bigger and more beautiful then the year before.  She always napped under that tree, and now she will rest there for ever.

I love you China, and I miss you already. 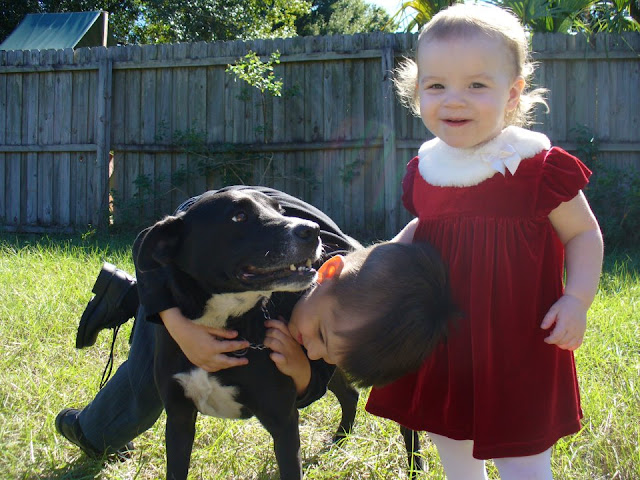 This was our Christmas card a few years ago. 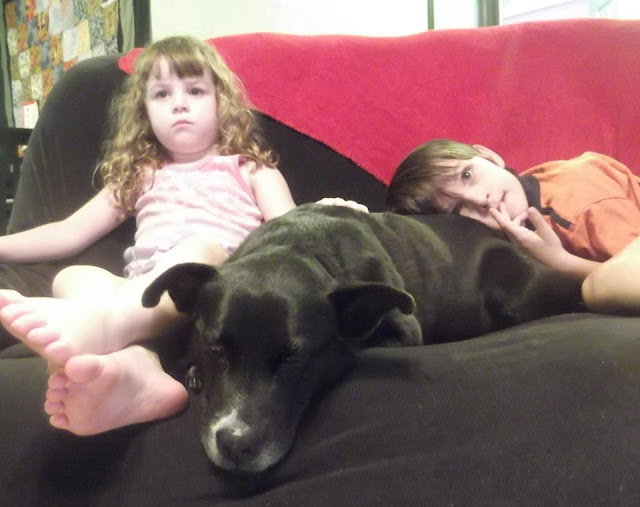 China's last day with us.
Posted by Jiujitsunista at 12:06 PM 13 comments: