The Women of Brazilian Jiu-jitsu.

I grew up with four brothers.  All of my early life they told me over and over that I couldn't do various things with them because I was a girl.  Girls don't play sports.  Girls can't play manhunt.  Girls aren't allowed.  Not because they were jerks, but because they were young boys.  So early on, it was ingrained me me that, girls can't.
I never played sports, I never went camping, never got dirty.  Girls didn't do those things.  That is until I stumbled into Brazilian Jiu-jitsu.

I went to my first class thinking it was going to be something like karate.  I expected to be punching and kicking the air, and of course the second I saw what it actually was, I thought, 'I can't do this!'.  But as it turned out, I  could do it.  Not only could I do it, but I could do it just as well as the boys, and even more than that... I loved it!  I wish I discovered it years ago.

Jiu-jitsu has taught me so much.  It has given me more confidence and drive, and it has completely changed the way I feel about being a woman.  I can be both, strong and beautiful.  Fierce and feminine.  And as a mother to a young girl, I am most grateful for these lessons.  No one will ever tell my daughter that she can't do something because she is a girl, not that she would believe them anyway.  =)

I have also discovered the wonderful women in the sport.  Almost every one I have come across has been sportive, encouraging and inspiring.  Either through direct contact, or over the internet via blogs, Facebook or email. (And some of the guys too!)  It seems as though there is almost an unspoken sisterhood among the women who train.  Black belts to white.  All weight classes and body types.  We are all women who train, and that alone is enough.  I feel bless to count myself among them.

Anyway, I made a little video tribute to the women who train because I do nerdy things like that.

Email ThisBlogThis!Share to TwitterShare to FacebookShare to Pinterest
Labels: jiu-jitsu, videos, women on the mat

Hibiclense - For Ringworm and Staph

If you read my other blog, you may know that my son recently had impetigo which unfortunately ended up turning into a full blown staph infection.  Thankfully it is all cleared up.

One of the things his doctor suggested we do to help speed along his recovery is use Hibiclense.  It is an antiseptic, antimicrobial soap.  We used to every day for 5 days and before we were even on the 5th day his staph was all but cleared up.  Granted he was also on antibiotics, but I think it helped quiet a bit.

On top of that, we had a ringworm out break at our school, and while I was there last week, I passed on the word about Hibiclense, and one of the guys who had not been able to get his ring worm to clear up for over two weeks used it, and his ringworm was gone in three days.

According to the website it kills MRSA, Ringworm, Athletes Foot, Herpes, bacteria and other viruses.  It also says it kills germs on contact and bonds to the skin and continues to kill microorganisms for six hours.

I am going to stash a bottle in my gym bag to use after class.

It is pretty inexpensive considering the head ache it could save me.   It is about 7 bucks for a 4 oz bottle.

Oh, and I almost forgot.  It will dry the crap out of your skin, so make sure to moisturize after you use it.  =)
Posted by Jiujitsunista at 6:48 PM 6 comments:

My belt has a mind of it's own.

My belt demoted me.
It can feel my suckiness, and my stripes have begun to merge together. 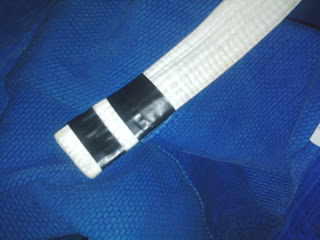 I should be offended by my belts lack of faith in me, but I just think it is funny.  I'm not going to be too worried about it though, unless my belt starts to choke me on it's own accord.
In other news, Zaile has been bugging me relentlessly to take me with her to Fabio's.  She is only three, and I know she is not ready for that yet.  With her attention span, general tininess, lack of control and failure to understand what tapping means I know she isn't ready.  But that doesn't mean she can't go to Barn-jitsu!  I can keep here there as long as her attention span will allow, and send her back inside when she is finished.  I don't have to worry about her misbehaving and disrupting class.
I'm only going to teach her movements, like hip outs and rolls, and positions.  If she is still interested when she is older then she will have a leg up, and if not... then oh well.  It is quality time with her, and good exercise.  Plus, it is super cute! 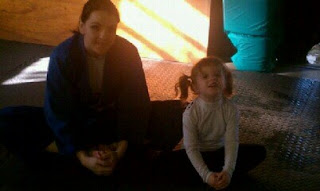 Posted by Jiujitsunista at 7:46 PM 14 comments:

Email ThisBlogThis!Share to TwitterShare to FacebookShare to Pinterest
Labels: barn-jitsu, fail, my belt hates me, stripe

I hurt my knee Monday night.  It a freak weird way.  I was in mount, and grape vined the legs, and the person went kind of ... flaily, and it pushed my knee out at a weird angle.  It hurt when it happened, but not much... enough for me to let go, and go to high mount, but it wasn't like, ouch submission, or ouch I think I just hurt myself, it was just uncomfortable... and has remained uncomfortable since then.  It doesn't really hurt unless I turn my knee in.  Which unfortunately for me, I do more than I realize.   I've been icing it, and all of that, but it doesn't seem to be going away.

I got a knee brace today, thinking if nothing else, if I wore it, it would keep me aware of my knee, and I would stop turning it in... but to my surprise, it has helped A LOT.  It had been at a very dull ache all week, but with the brace on, it doesn't seem to bug me at all.  And it's not uncomfortable to walk anymore.  Yay!

Now to attempt to grapple in it.  Should be fine, but I am sure it will be a little weird.

The brace however squeezes my leg flesh out the top and bottom of the brace, and makes my knee cap look like a brain when I straighten my leg, but whatever.  It doesn't hurt, so I'm not going to complain about it.  lol 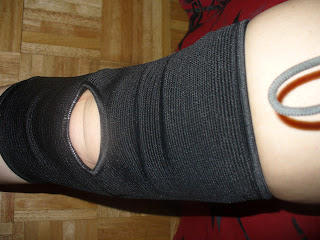 Email ThisBlogThis!Share to TwitterShare to FacebookShare to Pinterest
Labels: injuries

I generally prefer defense to offence, and have always been more of a sweeper than a submitter.  Even though I realize submitting people is not rude, I always feel like a jerk when I do it.  It is probably one of my biggest downfalls as I don’t often work them, so my submissions are always the crappiest part of my game.
Anyway, tonight when I was grappling this teenage boy I was working positions and just general technique since I am rusty.  He is smaller than I am and somewhat newish to Jiu-jitsu, so if I forget a step, or do something wrong I can recover and it doesn’t turn into an epic fail on my part.  However, while we were grappling I started to go for a triangle, and he said something to the effect of “oh no!” to himself, not to me or anything, it was just he realized he made a mistake and was verbally bummed about it.  So, I let it go.  And he FLEW around to side control, and instantly went for an arm bar, and instead of trying to defend it, I figured I would just roll out of it and come around to side control…. But no.  The kid totally blocked my roll out attempt, and instead of trying to be a jerk and  muscle out of it, I just tapped.


I will however give total credit to the kid for his armbar.  It was a nice armbar and he legitimately stopped me from rolling out of it.  However, my niceness is what got me into the situation in the first place!  I need to knock that crap off.  I’ve always had the issue of not wanting to submit people.  I know it’s wrong, and it is literally what people go there for, but sill.  I feel bad when I do it, and tonight I got myself submitted for failing to submit someone when I should have.  I’m not only denying myself practice, but I am denying my training partners the same thing.  No one benefits when I let go of submissions.


I did it a second time when I grappled someone I had not grappled since I left.  I was a little nervous about grappling them, not in a bad way, but more or less wondering how I would stack up due to my lack of training, so I went into it thinking, “Okay Stephanie, go for it.”  But the second I realized I could still hold my own against the person, I took my guard down, and ended up in a crappy position.  It was annoying because I knew I shouldn’t have been there in the first place and also because I need to just go for it.  I’m only training one day a week right now and I need to make the most of every single grapple I am given.
I need to stop being so passive.  I need to grapple like I mean it, not like I am their mommy.
I need to watch 300 before I go to class every day.  lol
Posted by Jiujitsunista at 11:18 PM 7 comments:

Email ThisBlogThis!Share to TwitterShare to FacebookShare to Pinterest
Labels: back on the mat, fail, I'm an idiot

Hey ladies, I need your help!

I need pictures and videos of you girls grappling, training, and competing.  =)

I'm making a video, and I don't want to just hijack your Facebook pictures and whatnot without your permission.

So, if you wouldn't mind being in my video email your pictures and videos to me at McStephy@gmail.com

Thanks in advance!
Posted by Jiujitsunista at 2:34 PM 5 comments:

Email ThisBlogThis!Share to TwitterShare to FacebookShare to Pinterest
Labels: help

When you are paranoid about ringworm...

There seems to be a small outbreak of ringworm, and I am now ultra paranoid that I too will become one of the infected!

When I woke up this morning and stumbled into my bathroom I had a bright red circle on my chest.  My initial reaction was panic, but upon closer inspection, I had slept on my necklace charm... It is a tiny handcuff, and it left a red ring impression on the middle of my chest.

So, thankfully I do not have a big red ring of disease on my chest... and have thus far remained uninfected.

... In my mind, I am pretended ringworm is really a zombie outbreak, and I'm avoiding it like my life depends on it... and I am sorry my friends, if you become infected and approach my door step, I will put my zombie gun to good use.  ... not really, but I am pretty bored, and I like zombies.  =D 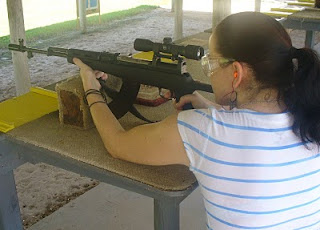 Posted by Jiujitsunista at 6:12 PM 5 comments:

This picture just makes me laugh.

Allie, the Clear Belt is short. <3 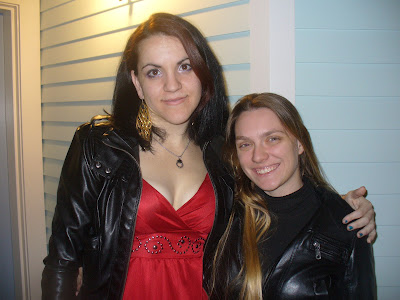 And, no, I am not on stairs or a step stool or anything like that.
Posted by Jiujitsunista at 1:25 PM 10 comments: 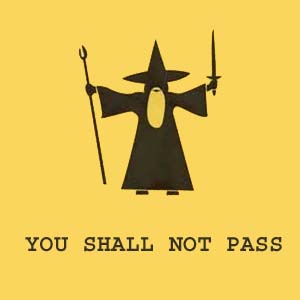