I am a calm grappler.  Possibly to a fault.  Even in competitions. 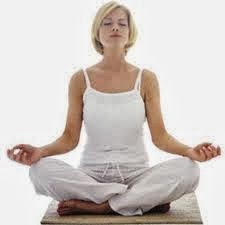 I close my eyes and tend to be more reactionary than to be the one to drive the pace of a grapple.

I know some people grapple with a lot of emotion and very competitively even in training.  I kind of wish I could be that way too.. it's just not me.  I grapple because it is fun, and I enjoy it.  Not because I feel compelled to win, or be the best.  I'd probably be a better grappler if I could find my competitive streak.  But alas, 3.5 years in and I still don't care if I 'win'.

However, last night I went straight rage mode mid grapple and it was probably more out of my control then I would like to admit. 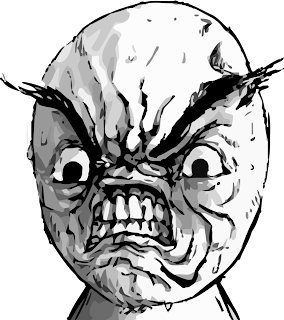 Had I been playing Monopoly, I would have flipped the entire table in a fit of rage, and stormed out of the room cursing like I had turrets. 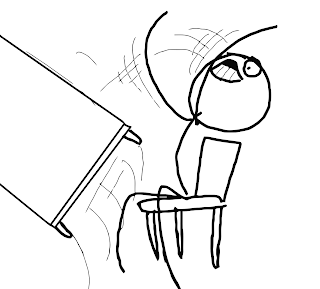 Sadly though, I was grappling another human being.  And I did exactly the thing that annoys me most.  I went from normal sane person to channeling the Hulk in .5 seconds.

I was grappling an I-am-mostly-done-with-puberty-but-am-not-yet-a-man child.  I started the grappling thinking, I'd let him do his thing, not realizing that our very lives hung in the balance and one of us was going to die at the end of that grapple.. Or at least, that is what I assume he was thinking because that is exactly how he was grappling.  At one point, he randomly just grappled my foot and went for a toe hold, and had he known what he was doing, or was in the proper position, he probably would have broken my foot. He just grabbed it and tried with ALL of his might to mash my foot in half... teeth grinding, shaking with the effort of trying to break my foot in half.  I wouldn't have had time to tap had it been applied correctly.

He is newish, and young and clearly doesn't know any better and has likely been watching Youtube... but it made me SO angry that he was trying his damnedest to ruin my foot.  I kicked him off my leg and threw him in a triangle as quickly and forcefully as I could and debated with myself very briefly if I should put him to sleep or not. But I didn't.  And after we started again I was still super pissed and grappled much harder than I should have for about 30 seconds before I was able to shut off the rage and grapple like a sane person.  And once I calmed down he remained calm for the remainder of the grapple.

Afterward I said sorry and explained to him that he needs to be a lot more careful with those kinds of submissions because you could really hurt someone.

He seemed to understand, but I feel kinda crappy that I lost my shit.

We both survived to grapple another day though.  So at least there is that.
Posted by Jiujitsunista at 12:59 PM